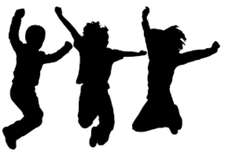 When you are a freshman at William Penn, you can sometimes feel a bit intimidated because of how big the school is and the number of students who attend the school. Students also feel a bit intimidated because they might be shy or have anxiety, but Ms. Minka’s EdCamp can help them reduce their stress levels because of what the curriculum has to offer. EdCamp is now being offered for the second time ever to freshman students who have Ms. Minka for Physical Education. The basic concept of EdCamp is for students to learn new sports, meet new people, connect with them and have fun while being physically active.
Personally, I feel like sometimes one must get out of his/her comfort zone to really open up to new things in life. When you’re being introduced to EdCamp, you may think it’s a bit odd or it’s not interesting but you really just have to give it chance and really be open to trying new things and new sports! Opening up to new things is also an essential skill you may need later down the road in business or pleasure, and should not stop you from missing an opportunity to learn and experience new things that may be life-changing or could benefit you greatly.

EdCamp also has a variety of sports and activities that you can really find enjoyable and you may also learn new sports and activities that you probably didn't know that existed! If you don’t like what’s being offered, you can volunteer to lead your own camp. Some examples are: Futpong, Nitroball and even the well-known sport itself lacrosse. EdCamp is definitely a diverse experience for many kids. There's really a quality selection of activities that you don't normally see in the average gym class thanks to Ms. Minka. She has incorporated some very critical ideas and has worked constantly to make PE such an amazing experience because at the end of the day there is one common goal. Minka’s goal is for students to have a great time learning new sports connecting and meeting new kids from around the school while having fun being physically active.
​
So don't feel afraid to crawl out of your shell and make some new friends. It’s time to build friendships, be physically active, create common goals, challenge each other, and make the friendly competition a lot of fun! If you personally feel like the EdCamp needs some adjusting, don't be afraid to interact with Minka. She is open to constructive criticism because EdCamp is only here to improve and benefit all the students have a desire to participate in this fantastic event that is growing every single year at William Penn High School. There is only one way the program can grow and that's by you participating and helping Minka make it an experience you will never forget! ​

With the inception of EdCamp, many students’ minds have changed the way they look at a physical education class. Gone are the days of forced activities and no student input. WIth Ms. Minka’s implementation of the revolutionary physical education teaching using “EdCamp,” the response back from students has been mostly positive. However, this does come with some exception, where some students had a negative view on the new teaching way. Although it is something new that the students were not used to, many embraced the change and took it for what it’s worth. Besides the typical “yes I liked it” and “no I didn’t like it,” each choice brought about the positives that they encountered as well as the negatives. An opinion on what a student would change in the program was also included.

Out of the 103 who voted for or against EdCamp, 89 students who participated were in favor of continuing the EdCamp physical education class next semester. The biggest factor for the positive side (and even negative) was the idea of having choice in what was available to play. Students liked the idea of to work with friends, to challenge themselves, and research new games they may not have heard before (such as pickleball or futpong).  These comments show that students did like the change of doing something different while with their peers, rather than having the same routine.

Unfortunately, the positives often come with some negatives. As great as the positives were, 14 students who voted were not in favor of continuing the EdCamp program into the next semester. A few problems that arose were lack of cooperation (including the “power hungry” students who might have dominated), immaturity, students who didn’t participate at all, and the occasional vocabulary quiz. Some of these problems could be addressed by more of a disciplinary action rather than verbal, but that would be an old fashioned way of doing things. (which EdCamp is trying to defeat).

Various changes that students recommended were to let the students with “good grades” lead the activities. Some problems that did arise during EdCamp were that students who may not have has the highest grades led the activities. This often lead to frustration and confusion, which did not shed good light onto the program. Other proposed changes were to add outside games (such as ice hockey, outside volleyball, etc.) rather than keeping them inside. Students expressed the interest to have “fresh air” and embracing the weather when it permitted.

Although some of the results were mixed, the reviews on EdCamp were rather positive. Some negatives could be addressed with some solutions, however, these have not been thought of yet. The changes proposed could see an increase in positive reviews for EdCamp, which could ultimately make it a 100% positive program in the near future.